View a video tour that we made to introduce the Town of Seligman, Arizona. 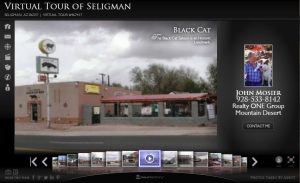 Seligman had its modern beginnings in 1882 as the Atlantic and Pacific Railroad laid tracks to what is now the town. The railroads were enticed and rewarded for laying track by the US government granting land in a checkerboard land pattern near where the tracks were being laid. I have written an article discussing the checkerboard land pattern and what it means to us today. Seligman was a prosperous town because of the railroads from around the time the railroads arrived until around the 1940′s.

It became prosperous again during the 1950′s as the first trans-continental highway, Route 66 was built. Seligman is known as the birthplace of Route 66. Cars did not go so fast at that time, so Seligman had quite a number of motels and restaurants to serve the traffic passing through.

The town suffered immensely when the Interstate Highway was built and bypassed the town.

The only prosperity the town knows now is because of the tourist trade. There is good hunting grounds in the abundance of the heavily treed Juniper Mountains west of Seligman. Nearly half of the land in the area is Arizona State Trust Land controlled by the Arizona State Land Commission. To the south is the Prescott National Forest and The Yavapai Ranch.

We use cookies on our website to give you the most relevant experience by remembering your preferences and repeat visits. By clicking “Accept All”, you consent to the use of ALL the cookies. However, you may visit "Cookie Settings" to provide a controlled consent.
Cookie SettingsAccept All
Manage consent

This website uses cookies to improve your experience while you navigate through the website. Out of these, the cookies that are categorized as necessary are stored on your browser as they are essential for the working of basic functionalities of the website. We also use third-party cookies that help us analyze and understand how you use this website. These cookies will be stored in your browser only with your consent. You also have the option to opt-out of these cookies. But opting out of some of these cookies may affect your browsing experience.
Necessary Always Enabled
Necessary cookies are absolutely essential for the website to function properly. These cookies ensure basic functionalities and security features of the website, anonymously.
Functional
Functional cookies help to perform certain functionalities like sharing the content of the website on social media platforms, collect feedbacks, and other third-party features.
Performance
Performance cookies are used to understand and analyze the key performance indexes of the website which helps in delivering a better user experience for the visitors.
Analytics
Analytical cookies are used to understand how visitors interact with the website. These cookies help provide information on metrics the number of visitors, bounce rate, traffic source, etc.
Advertisement
Advertisement cookies are used to provide visitors with relevant ads and marketing campaigns. These cookies track visitors across websites and collect information to provide customized ads.
Others
Other uncategorized cookies are those that are being analyzed and have not been classified into a category as yet.
SAVE & ACCEPT