I list and sell land parcels in Arizona. I am often asked why the development occurs in a checkerboard land use pattern.

This example map shows an area southwest of Seligman, Arizona that is a checkerboard land use pattern. In this map, the yellow sections are private land, the blue is Arizona State Trust Land, and the green designates land in The Prescott National Forest. There is no BLM land in this area. 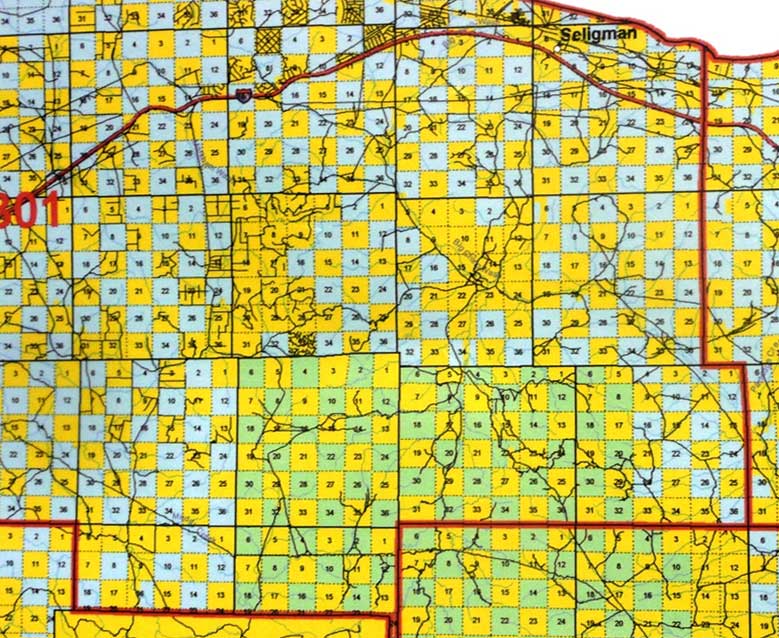 In Arizona, at least in some areas, the remaining land eventually was given to the Arizona State Land Trust and was initially for the benefit of our school systems. Income for the schools is still derived by grazing leases of these lands. In the areas with the checkerboard pattern still intact, the public land provides around 50% open space. Much of the privately held land, which was originally held by the railroads, has been developed. In the Seligman, Arizona Area, many of these sections were divided into lots of 36 acres or slightly more. Those parcels with borders against the public lands are desirable because of the sections of open space. Very few of these parcels are fenced, so the area is mostly open range.

There are three major developments of this type southwest of Seligman. These are The Sierra Verde Ranch, Shadow Rock Ranch and Juniper Mountain Ranches. Elevations range from around 5,100 feet to about 6,200 feet. As of the time of this writing, the number of dwellings run about three to five dwellings per square mile and most of these are getaways and not permanently occupied. Please see my Frequently Asked Questions about Bug Out Places.

Arizona State Trust lands are not “public lands”, as are Federal lands under the management of the U.S. Forest Service or the Bureau of Land Management. Federal “public lands” are managed for the benefit and use of the public, while State Trust lands are managed for the benefit of 13 Trust beneficiaries, which include the public schools and prisons. The Land Department’s trust management responsibilities include requiring a permit or lease and charging a fee for use of Trust land. Exceptions to this requirement are licensed hunters and fishers, actively pursuing game or fish, in-season, and certain archaeological activities permitted by the Arizona State Museum.
Recreational Permit allows the signatory limited privileges to use State Trust Land for some recreation. Recreation under this permit is limited to hiking, horseback riding, picnics, bicycling, photography, sightseeing, and bird watching. Camping is restricted to no more than 14 days per year. Off-Highway Vehicular travel on State Trust Land is not permitted without proper licensing.
The Arizona State Land Department has a webpage describing the Permits they offer.
There is also a page summarizing the uses of Arizona State Trust Land.

A portion of The Prescott National Forest (PNF) includes an area that is in a checkerboard pattern. In the map below, the sections belonging to the PNF are in green. Some of this is in an area designated in The Yavapai Ranch Land Exchange and an elaborate land swap has been approved by the US Congress. This land swap will result in part in making this portion of The Prescott National Forest contiguous and in making other sections of land outside the PNF contiguous, as well. The Yavapai Ranch Land Exchange is in the stage of gathering appraisals.

[Update: On 4/15/11 I was in the Prescott office of the Bradshaw Ranger District of the Prescott National Forest. There I learned that the Yavapai Ranch Land Exchange, although approved by Congress may not happen. There was a specific amount of time granted for the exchange to happen. It seems the money was never put up to have the necessary appraisals performed.]

Please see my map of this area showing properties that are for sale.

I have many listings in the Seligman Area, as work in the area gives me a chance to get out of the office and to see the sights and watch for animals. My listings are summarized on my Properties Page here.

My dog, Beau, is my constant companion and my real estate
assistant. If you shop for land with me, you will likely get
to meet him. Learn more about Beau here.

We use cookies on our website to give you the most relevant experience by remembering your preferences and repeat visits. By clicking “Accept All”, you consent to the use of ALL the cookies. However, you may visit "Cookie Settings" to provide a controlled consent.
Cookie SettingsAccept All
Manage consent

This website uses cookies to improve your experience while you navigate through the website. Out of these, the cookies that are categorized as necessary are stored on your browser as they are essential for the working of basic functionalities of the website. We also use third-party cookies that help us analyze and understand how you use this website. These cookies will be stored in your browser only with your consent. You also have the option to opt-out of these cookies. But opting out of some of these cookies may affect your browsing experience.
Necessary Always Enabled
Necessary cookies are absolutely essential for the website to function properly. These cookies ensure basic functionalities and security features of the website, anonymously.
Functional
Functional cookies help to perform certain functionalities like sharing the content of the website on social media platforms, collect feedbacks, and other third-party features.
Performance
Performance cookies are used to understand and analyze the key performance indexes of the website which helps in delivering a better user experience for the visitors.
Analytics
Analytical cookies are used to understand how visitors interact with the website. These cookies help provide information on metrics the number of visitors, bounce rate, traffic source, etc.
Advertisement
Advertisement cookies are used to provide visitors with relevant ads and marketing campaigns. These cookies track visitors across websites and collect information to provide customized ads.
Others
Other uncategorized cookies are those that are being analyzed and have not been classified into a category as yet.
SAVE & ACCEPT